On my last trip to Texas, I was passing through Fort Worth and called an old friend to meet me for lunch. When he asked what I wanted to eat, I said, “Chicken fried steak,” since, for all of its wonderful food, that is not a part of the Carolina culinary lexicon. As I was driving, I got word to meet him at the Ol’ South Pancake House, a Fort Worth standard with whom I have a history of my own. Beyond the battered beefsteak and cream gravy, he also offered me several books. Best of all we got to feast on our friendship for a couple of hours.

I should say here that a book from my friend is no small gift. He loves to comb used book stores looking for specifics and surprises. He brought five volumes for me that day, each one inscribed with a personal message that makes them even more valuable. This afternoon, I sat in my favorite coffee shop and began reading one of the books: Rock of Doubt

by Sydney Carter. The book is big and square and thin with a black and white cover that feels like it could have been written by Shel Silverstein. Each chapter is not more than one or two pages of conventional text accompanied by a page of graffiti: a large print quote that ties into the topic at hand. About four chapters in, I turned the page to the words, “The Jesus Ballad.”

Carter goes on to talk about the differences between composed music and folk music, the former being written down and codified and the latter being handed down and open to interpretation. He writes:

Looking for what Jesus actually said and did is like looking for the original version of an ancient ballad. The four Gospels are like four variants. By the time they started to be written down the folk process had already gone to work. You cannot keep a live tradition down: it will go on sprouting new interpretations. If you do not like them, you can call them heresies. But any singer worth the name will keep on reaching for the song behind the song. You can call that going backward or going forward. To interpret you must recreate.

The first place my mind went was to a recording I found of Pete Seeger singing “If I Had a Hammer” in 1956, when the song was still new. I went looking for it the day he died. It was one of the songs that helped me grow up a little as a guitar player and, I suppose, a folk singer. Take a few minutes and listen.

What I realized as I watched it for the first time was what he sang was not the melody I learned. I was a ninth grader with a guitar in 1969 and what had been handed down had more to do with Peter, Paul, and Mary.

Wait. Our multimedia experience is not over. There’s one more. Last summer at Farm Aid, a ninety-four year old Seeger came out on stage and sang the song almost sixty years after the recording you saw a couple of paragraphs ago. Watch.

That’s right. He sings Peter, Paul, and Mary’s melody line with a failing voice that has all the authority and compassion of one who has stayed true to the song and changed with the times. Along the way, he even turned an old hymn into an anthem of his own:

What resonates with me in what Carter and Seeger are saying about life and faith is that both thrive in the handing down, in teaching others to sing. The instruments change, the tempo varies, the key is wherever we are most comfortable singing, and we are all part of the same choir. Carter continues:

As a device for forcing us to exercise faith on a heroic scale, Christianity could hardly be improved on. By Christianity I mean the whole perplexing, exasperating, mind blowing apparatus by which the messages of Jesus have been handed down. It dangles before us, not a saving certainty, but a bright, blurred possibility that fills the heart with hope and discontent and dares us to make the necessary leap. Christianity kindles the imagination: through all the broken and corrupted variants we catch the echo of the song behind the song.

Not a saving certainty, but a bright possibility. Yes. Our faith is more doorway than wall, our calling more invitation than correction. We are made to sing along. Faith is not about being right, it’s about being creative, about being willing to risk, most of all, in relationship. It is not a set piece, but a work in progress. Carter finishes the chapter with these words:

Christianity is incurably folk: it forces us to recreate it. If we cannot, it will die.

Indeed. After all, it’s a song about the love between my brothers and my sisters. 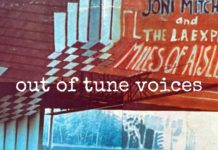