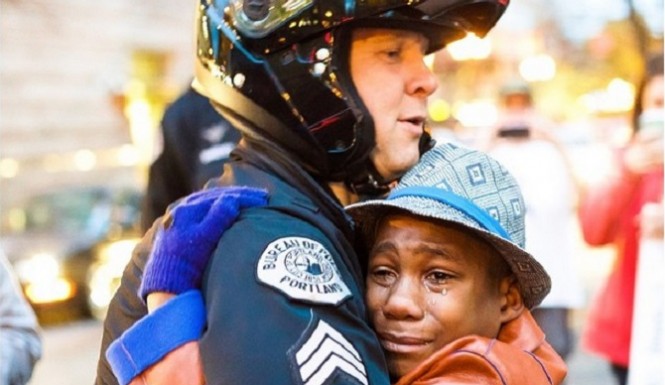 I don’t know who said it, or where I first heard it, but for years I have remembered the First Rule of Theology: there is a God and it’s not me. I find comfort in that sentence. Being God looks like an incredibly difficult job. There’s something about the Incarnation that flips that statement over, however. God stepping into the big messy middle of human life to say, “There are humans and I’m one of them.” A change for the God who told Job to make the sun come up and then they could talk.

Emmanuel. God. With. Us.

The recent news from Ferguson and Staten Island are symptomatic of the continuing drift of our society into Us and Them on most any issue. We are us. All of us. Down to the last angry protestor, the last scared cop in riot gear, the last suicide bomber, the last self-absorbed member of Congress, the last manger in Bethlehem. Life, as Anne Lamott said this week, is forgiveness school.

In one of my training sessions at the computer store this week, a woman asked me to explain something she didn’t understand. I have explained it many times, and I have analogies and metaphors that have proven effective. I used them all up and tried to come up with a couple more and she said, “I hear what you’re saying and I know it makes sense, but I just don’t see it. I don’t get it.” What I loved about the interaction, though it was quite frustrating not being able to communicate, was it never became adversarial. We both stayed on the same side of the struggle, pulling for and with each other.

If life is forgiveness school, then we have a lot to learn. We aren’t getting it. We can only learn together. Forgive, and we shall be forgiven.