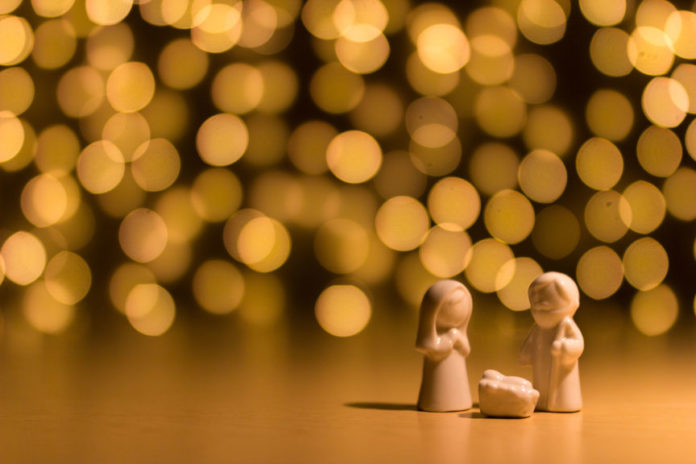 Since we didn’t get to have a Christmas Eve service, I chose to preach on Luke 2:1-7 for the first Sunday of Christmas. If you are watching the video, the reason I am singing acapella is I cut my finger on one of my sharp knives while I was putting them up and ended up with seven stitches in my left index finger. I didn’t do any permanent damage, but I couldn’t play guitar tonight.

When I was growing up, our Christmas decorations were only up for two weeks. My birthday is December 12th and my mother was determined that it would not get lost in Christmas, so she didn’t pull out the decorations until December 13–and then a Christmas bomb went off in our house; it was decorated top to bottom. My father, for reasons that were never explained, wanted all the decorations to come down the day after Christmas, so that’s what we did. By mid-afternoon on Boxing Day everything was put away.

As I began to celebrate Christmas as an adult, and also as I learned about Advent and the seasons of the liturgical year, which were not a part of my upbringing, I learned that Christmas was just getting started on December 25th, not ending. We are in Christmastide, a time when we can rest and think about what it means that God became human in Jesus. With that in mind, I want to go back to the first verses of Luke 2, which we traditionally read as a part of a Christmas Eve service and hear again the story of Jesus’ birth.

In those days Caesar Augustus declared that everyone throughout the empire should be enrolled in the tax lists. This first enrollment occurred when Quirinius governed Syria. Everyone went to their own cities to be enrolled. Since Joseph belonged to David’s house and family line, he went up from the city of Nazareth in Galilee to David’s city, called Bethlehem, in Judea. He went to be enrolled together with Mary, who was promised to him in marriage and who was pregnant. While they were there, the time came for Mary to have her baby. She gave birth to her firstborn child, a son, wrapped him snugly, and laid him in a manger, because there was no place for them in the guestroom. (Common Bible)

I particularly chose this translation from The Common Bible because of the last sentence. Did you catch it? There’s no inn, but a room. It says there was no place for them in the guest room, which is actually a more accurate translation of the Greek word katalyma. Mary and Joseph weren’t trying to find a hotel room and just ended up in a barn behind some Bethlehem bed and breakfast. They had gone to Joseph’s hometown to register for a census demanded by the Roman emperor, which meant he had relatives there. Judean homes had rooms where people stayed, and they had a room—in the house–for their animals, probably sheep or goats. Because the guest room was full—I’m guessing because everyone was in town for the census—Jesus was born in the feeding trough in the back room, surrounded by family.

What happens to us when the story we thought we knew turns out to be something else?

With that question in mind, I want to tell you another story about my father.

Right before Ginger, my wife, and I got married, we were with my parents in Texas and my grandmother, who was actually my father’s stepmother, but the only paternal grandmother I ever knew. All my life I had been told my father’s mother, Bertha, died in childbirth. The grandmother I knew, Marie, came that day with a box of scrapbooks and newspaper clippings none of us had seen before. I was thirty-three at the time; my dad was sixty-one. One of the clippings was Bertha’s obituary. She died a month after he was born. I could see by the look on my father’ s face that he had never heard that information before. Instead of his parents having to choose between whether he or his mother lived, for a month of his life she got to hold him and care for him. His birth was not the cause of her death.

I’ll ask my question again: what happens to us when the story we thought we knew turns out to be something else?

Perhaps it causes us to look at the whole story again.

In these seven verses that we have heard so many times, half of them are spent talking about the forced registration by the Roman government. Rome wanted a head count. Jesus was born under the thumb of empire. Joseph had to go to his family home to register, and Mary, his pregnant fiancée, went with him. Let that sink in for a minute. Mary was so far along in her pregnancy that she went into labor, it seems, not long after the family introductions and by the time they find a place for her to give birth, Jesus was born in a manger. The one we call Christ came into the world in the middle of political oppression, family scandal, and people scrambling to make a place for him. While the known world was bending to the rule of the Roman emperor, God changed the world through an insignificant couple in a back room in Bethlehem.

I was talking with someone about all of this over the past couple of weeks, and they said, “I love all of that, but how would we work that into the Christmas pageant?” I get that. At my wife’s church in Guilford, the tradition has been that the littlest kids are the animals and they can come dressed as any animal they want. Our nativity often includes lions, tigers, dinosaurs, and Eeyore. At the same time, I think what would it do to us–to our faith, our sense of ourselves as the people of God–if we told it with fresh understanding?

The question moves me from pageants to pandemic: what happens to us when the story we thought we knew turns out to be something else?

2020 has been a year none of us expected. It has been a year of grief that has made us see our story in ways we have not before. My mother-in-law who is in her eighties has remarked more than once that she didn’t expect to spend her last years this way. The story of this congregation, like most any congregation, has been one of gathering together, which is still months away from happening. What happens to us when the story we trusted changes?

Let’s go back to the Greek word I mentioned–katalyma. The only other places it shows up in the New Testament are in Luke 22 and Mark 14: it is the word used for the upper room where Jesus and his disciples shared the meal on the night before Jesus was executed by the same Roman government who had forced his family to register for the census.

The word is a common word without great theological significance, other than to say it was the room that was so full on the first night of his life that he had to be born in the manger and it was the room where he gathered with those who loved him on the last night of his life. To say that there was no inn, but a room, for me, is say little details may not bring big answers, but they offer us new understanding. I heard an author speak one time and talk about how his life had hinged on “an important slight change.” Perhaps the change in translation from an inn to a guest room is the important slight change that offers us room to wonder as we wander through these days.

Our story is that we can’t wait for 2020 to be over. We have felt like we are at the mercy of the pandemic and unable to do much about the political turmoil that has plagued us as well. The story that 2021 appears to offer–at least what we can see of its beginning–is more of the same: pandemic, political division, and physical distance. The story that begins our Christian year is that Jesus was born in the middle of a mess and lived his life in the middle of a mess and kept saying over and over that the point was to love one another no matter what. And love is best communicated in important slight changes.