A friend gave me a book for Christmas–One Long River of Song by Brian Doyle. Because I received several books for Christmas, I didn’t get to start it until last Sunday morning. As I read the dustcover (you should always read the dustcover), I learned the volume I held was a posthumous collection, put together by a friend, filled with essays that had been favorites from Doyle’s writing, which was prolific, and some more obscure pieces. The friend who collected them also wrote a foreword, saying of Doyle that he “liked short essays and long sentences. Just reading that made me think I would have liked him. Brian Doyle and I, you see, we’re born the same year. He died of cancer in 2017, just shy of his sixtieth birthday. Here is a taste of his banquet of sentences from a piece on humility called “The Final Frontier,” where he calls us to “realize we are all broken and small and brief.”

This is what I know: that the small is huge, that the tiny is vast, that pain is part and parcel of the gift of joy, and that this is love, and then there is everything else. You either walk toward love or away from it with every breath you draw. Humility is the road to love. Humility, maybe, is love. That could be. I wouldn’t know; I’m a muddle and a conundrum shuffling slowly along the road, gaping in wonder, trying to just see and say what is, trying to leave shreds and shards of ego along the road like wisps of litter and chaff.

I think it was after church that I found out that singer-songwriter David Olney had died. I didn’t know him or his music either. The story caught my attention because he died in the middle of a concert. In the middle of a song. He stopped singing, apologized for doing so, and then put his head on his chest and died. He didn’t drop his guitar or fall over; he just died. As I watched the number of people grieve for him online, I spent a good bit of the afternoon listening to his songs, some of which were covered by Emmylou Harris, Linda Ronstadt, Steve Earle, Slaid Cleves, to name a few. His playing and singing reminded me of so many folks I love: Guy Clark, Rodney Crowell, Townes Van Zandt. Olney and Townes were friends along the way.

Twice in a weekend I was reminded of people I had missed.

But what I have been feeling is something other than FOMO, as you kids say. I am a person who loves to read and play and sing and listen. What both of these men were doing is right in my wheelhouse. The things that Doyle wrote about, and the way he wrote about them, resonated with the way I hope I’m looking and listening. I found out Olney had a Youtube series called “You Never Know” where he posted a weekly video on songwriting. He had recorded over four hundred episodes. I had not seen any of them until tonight. The last episode was posted yesterday. Olney sang “You Are Here.”

the earth will turn from night to morning
the moon and stars will fade away, fade away
all things must change it will not grieve me
as long as I know you are here, in my heart, you are here

I rode the Metro North train into New York today on my weekly trip to the Church Publishing offices. On the morning ride we all sleep, for the most part. In the afternoon there is a little more energy, but the only ones talking are folks who already knew each other. I took a seat in my usual place–second car from the front, two seater that faces another two seater, which generally means only one other person will sit there. A man got on at the 125th Street stop and put his bag down in one seat and sat in the other. He opened the bag and pulled out a clipboard, a notebook, and a library book that was turned upside down. I was reading Doyle. After a while, I looked up and he was sleeping, but I could see the book in is lap and it was one I had read about, Semicolon: The Past, Present, and Future of a Misunderstood Mark.

I waited for him to wake up, which I thought was nice of me, and then asked how he liked the book. He said it was pretty good and he liked books about the history of things, which then lead to a larger conversation about reading and, ultimately about us. His name is Carl and he works as an elevator repairman in New York, which he has done for thirty years. Talk about job security. For the last eleven years, he has inspected and repaired elevators in public housing. He asked about my job and I told him what I did. Our conversation bounced from elevators to books to us and took us all the way to Bridgeport, which was his stop.

“I ride this train everyday,” he said on his way out, “I’ll look for you next Wednesday.” Underneath his words was the truth that we had both been on that train before and not seen each other.

After he left, I had another twenty minutes to my stop and I thought some more about Brian Doyle and David Olney and what it meant to me that I had missed them. Then I thought about Carl some more and how glad I was we found each other for our ride, even if we don’t find each other again, and I realized what mattered was not so much that I figure out how not to miss people like Brian and David, but to relish that I found them or they found me, whatever the case may be. Both men died before I knew of them, but I am basking in the wake of wonder and witness that they left behind. Because I was willing to look up rather than keep my nose in my book, I saw the semi-colon, which provided the necessary punctuation for Carl and I to share a few sentences.

We ran out of time before I had a chance to show him the semi-colon tattooed on my right forearm, a reminder to me and whoever else needs it that my depression is not the end of the sentence; there is more to the story.

There is no way to see all of the show. I can’t hear all of the songs or read all of the books. I can’t meet everyone or do everything or go everywhere. At the same time, I can miss some of what is right in front of me if I forget to pay attention. I am grateful for friends who send books, for people who grieve out loud, and for elevator men who carry books about semi-colons on their ride home from the ups and downs of their day.

PS–Here is the video from the final episode of “You Never Know,” posted yesterday. 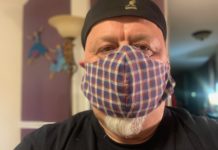 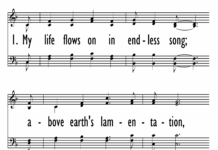 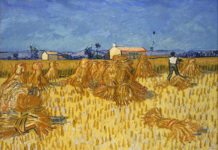