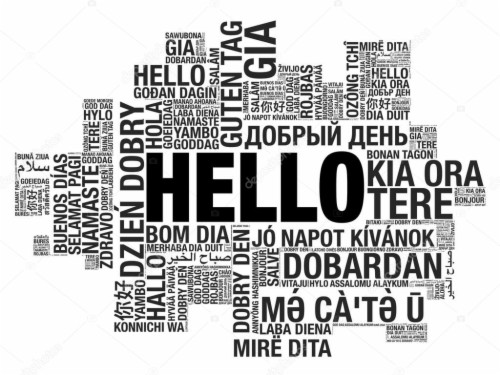 I went back to In the Shelter by Pádraig Ó Tuama this morning because I needed his words again. I have no doubt his is a book I will keep coming back to. In the opening pages, he writes about Jesus visiting the disciples in the upper room after the Resurrection. He recalls an experience at the monastery in Taizé, France.

The Taizé brother suggested we pause for a moment and consider the words ‘Peace Be With You’ that the resurrected Jesus says to his locked in followers. The Taizé brother said that, in a real sense, we can read that as ‘Hello’. After all, it’s the standard greeting in Hebrew, Arabic, and Aramaic. He smiled and asked us all to say hello in our own language. There were many languages in the room. Then we approached the text again.

The disciples were there, in fear, in the upper room, locked away, and suddenly the one they had abandoned and perhaps the one they most feared to be with them was with them and he said hello.

Hello to you in this locked room.

It was raining this morning when my friend Peter met for coffee, as we do most every Thursday morning at the Marketplace. Since we we locked out because of the restaurant closures, we got to go coffees at Cilantro and went down to the pavilion at Jacobs Beach. As we were settling in, a large AA group showed up looking for a place a group could gather that was dry and covered. We let them have the pavilion and we ended up sitting on the platform at the train station, waiting to go nowhere. As we sat there, the train came and went with no one on board.

I think about the people in that upper room. In just a day or two their lives had been thrown into total upheaval. Jesus had been arrested and executed and resurrected. Most of them had seen him. They had tried to go back to their fishing boats, but it hadn’t worked. Even the news that Jesus was alive had not altered much. They had self-isolated and locked themselves in the room where they had last had dinner with him. They were quarantined by their fear.

The story goes that Jesus came through the door. Without opening it. The lock stayed locked, but, all of a sudden, he was in the middle of the room.

“Peace be unto you.”

The disciples didn’t know to answer, “And also with you.” They just sat there.

Thanks to Pádraig, I picture Jesus holding the silence for a moment and saying, “Hello?”

The oldest roots of the word hello mean “a shout to attract attention”–hey, it’s me. With the invention of the telephone we started using the word hello as a greeting, a way to start a conversation across a distance. We heard the phone ring, picked it up, and said, “Hello.”

It was the first word of connection.

Hello . . .
in front of this closed restaurant
from this empty train station
in this overcrowded hospital
as I sing from my balcony
as I work to keep my business open
from a deserted sanctuary
in front of empty shelves
from this drive through window
from a safe distance
from a lonely room

The roots of the word peace mean “freedom from disorder” and “reconciliation, silence, and permission.” The most ancient meaning is “to fasten; a binding together.”

Peter and I had been in the pavilion about ten minutes before the first person arrived. He was an older man with a sort of Crocodile Dundee hat on. He didn’t speak when he came in, but sat at the other end of the pavilion smoking a cigarette. When two or three others started showing up and Peter and realized he was not alone, the man said, “I thought perhaps you were here for the AA meeting.” He was happy to say hello. To make room in the circle.

To offer peace. A binding together.

The Resurrection didn’t bury the fears of the disciples. They didn’t all yell, “He’s alive!” and everything went back to normal. And even this moment was not the last time they locked themselves in the room to feel safe. They locked themselves to be together, but fear carries no connective tissue. We are not bound together by what we are afraid of. As we hunker down and wait for more information about Corvid 19, our fear is not what will unite us. We, too, must dare to say hello from our locked rooms. 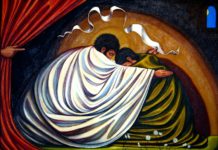