We gathered around our table tonight for another Thursday Night Dinner, which means we sat long after the food was finished to talk and tell stories. Somehow the conversation w 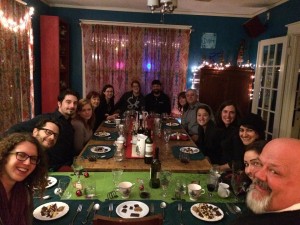 ound its way to one of the folks asking about those Christian sects that identified as “snake handlers.” His question and the answers that came from around the table reminded me of an experience I had as a boy.

We were on furlough from Africa and were in the mountains of North Carolina where Dad was to preach a revival for one of his seminary friends who was a missionary to the people back in the hills of Appalachia where he had grown up. The memories I have play like vignettes in my mind. I remember pulling up in front of old dilapidated houses and being told by my father’s friend to wait in the car as he went towards the door. On more than one occasion, the person inside came out with rifle drawn, wondering who the strangers were with very little intent to welcome anyone.

I also remember going to the service with Dad. Before the first one, Dad took my brother and I aside and said, “Boys, you’re going to see some things tonight that you’ve never seen before. Just stay together. Everything will be alright.”

When the time came for prayer in the service, all the men in the room—about thirty of them—came forward to the altar and grouped together. The pastor called on one man to lead them. No sooner had he said, “Dear God . . .” that all of the rest of the men began praying out loud, and loudly. I couldn’t understand much of what anyone was saying, but the room swirled with the emotion and spirit being generated by those praying. Some had catch phrases that seemed to circle around. I remember one man who said, “And the whole world” seven or eight times in a voice big enough for most of the world to hear. In my memory, the prayer went on for seven or eight minutes and then, by some unseen sign, they all got quiet except for the one who had started it all and he said, “In Jesus’ name, Amen” and they all went back to their seats.

When I finished the story, our guest said, “I didn’t grow up around organized religion and don’t really see the point of much of it. But I would kind of like to be a part of something like you described—that tribal sense of ritual and belonging. Too much of what passes for religion has a political agenda. That feels different.”

I have always been pulled by the verses in the Acts of the Apostles that talked about how those who were not a part of the burgeoning faith looked at those who were: “Look at how they love one another.” We don’t hear that much anymore. Paul admonished those to whom he wrote to “not forsake your gathering together.” Jesus’ last prayer was centered around one main idea: “make them one.” As I know I have said many times before, life and faith are team sports. At the heart of both life and faith is belonging. If we are not tightening the bonds and widening the circle, then we are missing the point.

I feel like I belong here in Durham because of the people around our table on Thursday night, because of someone calling my name walking down the street, because of conversations over coffee and beer, because of the shared experience of living these days together. I feel connected with friends down the years because we talk to each other in movie lines and song lyrics, because we have walked side by side through the valleys of grief and disappointment, because we have clung to the sustaining rituals of friendship. Lent, at its best, is not an institutional directive, but a relational connective: let us walk this road together towards the Resurrection. We are on pilgrimage—a modern day Canterbury tales—traveling side by side and telling stories to mark the time and tighten the bonds. When we get to the end, what will convince us most of all that Christ is risen will be our sense of belonging both to God and to one another.

Just stay together. Everything will be alright.