Life is a team sport. If I had a dollar for every time I’ve uttered that sentence I’d have enough to take us all to dinner. Being together is a fundamental human value: we were made to live in community. Yet tonight I find myself looking again at my metaphor. Part of the reason is the quote from the amazing novel I finished today on my lunch hour. That last sentence has haunted me for the rest of the day.

He hid inside the pronoun we.

The problem with a sports metaphor is it holds in implicit competition: the we is defined by a them. We join together to win, to defeat, to crush. The verbs only escalate. Yes, there is something wonderful about winning together, even as a fan. When the Red Sox came back from a three-games-to-none deficit to defeat the Yankees and go on to win their first World Series in eighty-six years, it felt great to be together. I also remember in those days there was a local entrepreneur who created a clothing line of “Yankee Hater” hats and t-shirts. The logo laid the Y and the H over one another in a way that mocked the New York logo. They sold well briefly and then died out. We wanted to be drawn together by more than hatred or dislike. We weren’t Yankee Haters as much as we were Sox Lovers—those who were deeply connected by our failures and disappointments and near misses, and then by the almost improbable taste of victory. I remember how the cemeteries in Massachusetts filled up with Red Sox paraphernalia. The tombstones of parents and grandparents who had died before the Curse of the Bambino was broken were decorated with pennants and hats. We was a good thing because it was about the team we loved.

All the shouting about the data breach and Bernie Saunders over the last couple of days, and the subsequent infighting within the Democratic Party alongside of the divisive and, well, toxic proclamation from Trump and others in the midst of the street fight that is the race for the Republican nomination leads me back to the quote that began this post. Choosing teams in our current cultural climate leans toward the dangerous side of we, because that we is being defined by them: the enemy, the danger, Those of Whom We Should Be Afraid. And the sport is winner take all.

A disclaimer here: I have not watched any of the presidential debates and I don’t intend to do so between now and next November because I don’t think they offer anything other than the political equivalent of roller derby or professional wrestling. (Apologies to both of those sports.) I’m sure at some level most of the candidates have ideas they want to communicate beyond inciting a mob mentality against any number of designated enemies, but the debates are about winning a fake fight. There is nothing there to help build consensus or true community.

When the decree went out from Caesar Augustus that all the world should be taxed, it seems as though the cultural climate shared similar weather to life in our time. Palestine was occupied, Pilate had all the backbone of a member of Congress, and the poor were taking it in the teeth so that the economy could feed the rich. Through most of Jesus’s earthly ministry he kept having to deal with questions—from both his friends and his enemies—that pointed to Them as a way of defining who We would be. Why do you eat with Them? Why do you listen to Them? Why are you seen with Them? Shouldn’t We do something about Them? Jesus’s response erased the lines. He ate dinner with the rich, the arrogant, the pious, the poor, the outcast, and the faithful. And then he told a story about a great banquet where the instructions were simply to fill the room with whomever would come.

For all my love of food, I keep talking about a team and the metaphor is right in front of me: Life and Faith are meals together where everyone is fed.

Last Sunday on my way out of church, one of our members said to me, “Would you like to meet 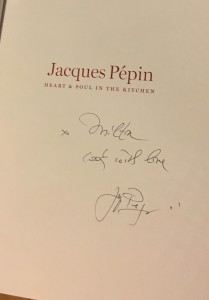 Jacques Pépin?” My answer was a quick yes. Jacques Pépin is one of the great chefs of our time. Turns out he lives in Madison—the next town up from Guilford—and he was signing his new book

this morning—the day after his eightieth birthday—at an amazing local bookstore, R. J. Julia Booksellers. Our church members picked Ginger and me up before I had to go into work and I stood in line to have him sign my copy of his memoir. Ginger snapped a picture. On the title page he wrote, “To Milton, Cook with Love. Jacques Pépin.”

Indeed. Life is a dinner party. Life is a team sport. Whether baseball or breakfast, life is wasted if it is not fueled by love. To be driven by conquest or fear or hatred or even righteous indignation turns life into little more than some sort of cosmic demolition derby where no one is left standing and everyone is damaged. We is not a place to hide or a bunker from which to lob bombs on Them. We is not a place to justify our sense of superiority or fortify our privilege. We is not a place to protect what’s ours or make sure things go our way at all cost. We is a banquet table with an open invitation. We is a ball park on the best summer afternoon you can imagine. Sit here at the table. Sit here in the bleachers. Bring whomever you can find.

And turn off the television.