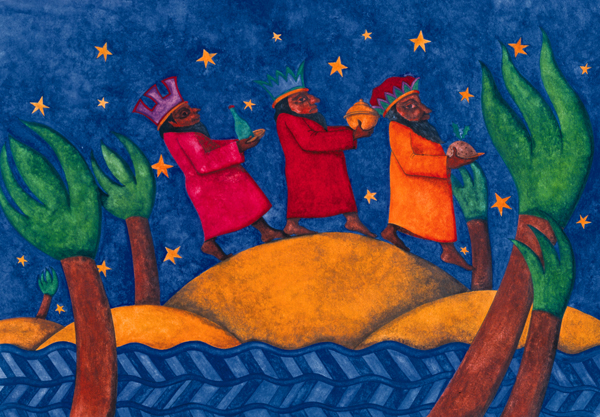 The word magos can mean “a magus, sage of the magician religion, magician, astrologer, wise one;” but, probably because it was King James who authorized the version that has most affected our telling of Jesus’ birth, we have come to call them the Three Kings. They make one appearance in Matthew 2, right on the heels of the birth narrative, though it seems reasonable to assume some time had passed. After all, Matthew skipped right over the shepherds.

The way most of us learned the story, the three magi, as we also call them (which just transliterates the word without defining it), followed a star to Bethlehem. But that is not what Matthew tells us. They were following a star, but instead of going straight to find the baby they went first to see the king, following, I suppose, the protocol of diplomacy and privilege. Or perhaps they were just naive. Either way, they were visiting dignitaries following the signs that had told them of a royal birth. Surely the current king would know what was happening and could advise them.

Herod took them in and took them for a ride. “find the child for me–and take good care of him. Then come back and tell me all about it.” The magi left the king and set out for Jesus. Matthew gives us no indication that they saw through Herod’s charade. They found the baby and delivered the gifts and prepared, it seems, to head back to tell the king where they had found the child–until they had a dream that told them to go home by another way.

It makes me wonder if the phrase “head in the stars” is something Mary came up with after the three allegedly wise ones left.

I suppose I am being a bit hard on them. I started to write that it is difficult to not be seduced by power, but I don’t think that is what happened to them. Their mistake was assuming that the one in power was not consumed with staying in power or amassing more of it. Maybe they had no idea who he was or what he was like. If they did have some sort of inkling, maybe they thought he would rise to the occasion. Whatever the reasons, their foray into foreign diplomacy almost cost Jesus, Mary, and Joseph their lives and set a massacre in motion. They brought gold, frankincense, myrrh, and unintended consequences.

My friend Bill Mallonee wrote a song called “The King Will See You Now” that saw the layers to this story before I did. It is part of a thoughtful and powerful record called WONDERLAND (A Christmas Season album). He puts Herod’s thoughts to music:

oh, I’ll offer him my worship
my best wishes and bright hope
never mind the dagger
underneath my cloak

I hear new kings get born every day
so me? I don’t sweat it all that hard
isn’t life just the funniest thing?
with all this changing of the guard?

And then comes the chorus:

and the pattern, it repeats itself
when power is asked to bow
whenever truth gets ushered in
ah, the king will see you now

Since the magi wandered across the desert, many governments have come and gone, but the lust for power and the fear of losing it continues to be the driving force behind most of them, it seems. And ours is no different.

When I heard of the assassination–ordered by President Trump–of Qassem Soleimani, an Iranian government official whom we killed in Iraq, I began trying to draw parallels. From my reading, the best correlation I can make is that he held a position equivalent to our Chairman of the Joint Chiefs of Staff. I tried to imagine how we would react as a nation, and how this particular president would react, if the Chair of the Joint Chiefs was on his way from the airport in, say, Germany or India and was blown up by a drone sent by an adversary because they felt threatened by him.

We would consider it an act of aggression, even evil.

Why, then, do we tolerate such actions from ourselves?

There is no question that Soleimani did terrible things and appears to have had no conscience in doing them. I have heard several defenders of the assassination use that as justification for the murder. If we truly believed that being a person of questionable character meant you should be removed it would be open season in Washington.

Why, then, do we tolerate such logic from our leaders?

The Magi brought their gifts and then Herod brought down his wrath. We have been told that the ten thousand migrant children who are in prison and separated from their parents are a threat to our freedom and that Soleimani had to die because he was going to do bad things. Every time Trump has a chance he finds another way to shout, “Be afraid! Be afraid!” because fear allows room for the lie that power makes us safe to take hold.

Those with the most power are the ones who are most driven by fear because they know how they got there.

and the pattern, it repeats itself
when power is asked to bow
whenever truth gets ushered in
ah, the king will see you now

We, too, need to find another way home. 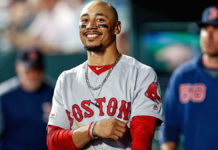