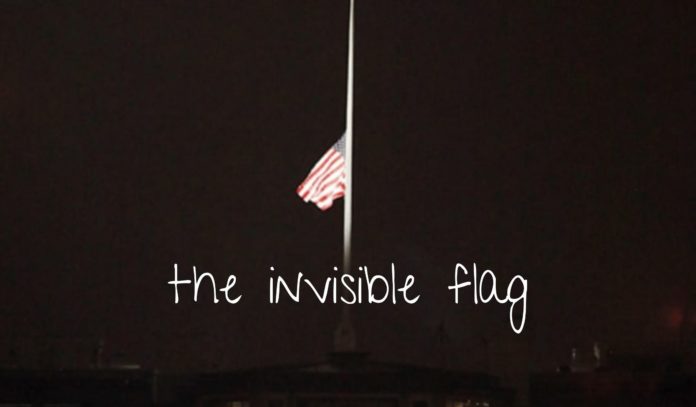 Last week as Ginger and I walked around the Guilford Green, I noticed the flag was at half mast. I wondered out loud who it was for, in part because I had not paid attention to the news for a day or two, but also because the recent spate of shootings gave me pause to think it could be for quite a number of folks. Turns out that day it was to mark the life of former Japanese Prime Minister Shinzō Abe who was assassinated.

When we got back home, I spent some time researching the tradition of lowering our flags as a sign of mourning and respect. The tradition goes back a little over four hundred years, as best anyone can tell, when the captain of the British ship Heart’s Ease died on a journey to Canada. When the ship returned to London, it was flying its flag at half-mast to honor the departed captain.

The flag was flown exactly one flag’s width lower than its customary position to make room for the “invisible flag of death.”

Over the last four centuries, the rules and traditions around flying the flag at half mast (or half staff, as it is sometimes called) have taken different shapes from country to country. For instance, Title 4, Chapter 1, Section 7 of the United States Code outlines strict guidelines for how long the flag is flown at half-staff following the deaths of various members of the government.

I found one website that lists all the half mast alerts across the country. Some are for nationwide remembrances and some are more local. I learned that last week in Connecticut, our flag was lowered to honor the life of Sandy Hook Fire Chief William Halstead who died in the line of duty.

Just reading the name Sandy Hook made my heart ache for that community because they live with such grief. Today I also read about those who died because of extreme heat, about raging fires in Europe and in the western US, along with the continued horror of all that is happening in Ukraine, in Somalia, in Sudan–the list is unending, and we haven’t even begun to talk about the ground level grief we carry that never makes the news.

The truth is there has never been a day when we did not need to make room for the invisible flag of death. We live half mast lives, lives acquainted with grief, no matter what we say we can see by the dawn’s early light.

A poem by Amanda Gorman found me this week, repeatedly, and it seems to fit here.

Hymn For The Hurting
Amanda Gorman

Everything hurts,
Our hearts shadowed and strange,
Minds made muddied and mute.
We carry tragedy, terrifying and true.
And yet none of it is new;
We knew it as home,
As horror,
As heritage.
Even our children
Cannot be children,
Cannot be.

Everything hurts.
It’s a hard time to be alive,
And even harder to stay that way.
We’re burdened to live out these days,
While at the same time, blessed to outlive them.

This alarm is how we know
We must be altered —
That we must differ or die,
That we must triumph or try.
Thus while hate cannot be terminated,
It can be transformed
Into a love that lets us live.

May we not just grieve, but give:
May we not just ache, but act;
May our signed right to bear arms
Never blind our sight from shared harm;
May we choose our children over chaos.
May another innocent never be lost.

Let us raise the invisible flag of death and claim it as our own, not as a sign of invasion or occupation, but as a banner of our humanity, our courage, our compassion, our sadness, and even our hope. Whatever flag flies below it is colored by conflicting allegiances. We will not find our unity there. But to see see the invisible flag is to know our days are numbered.

We have everything to live for.