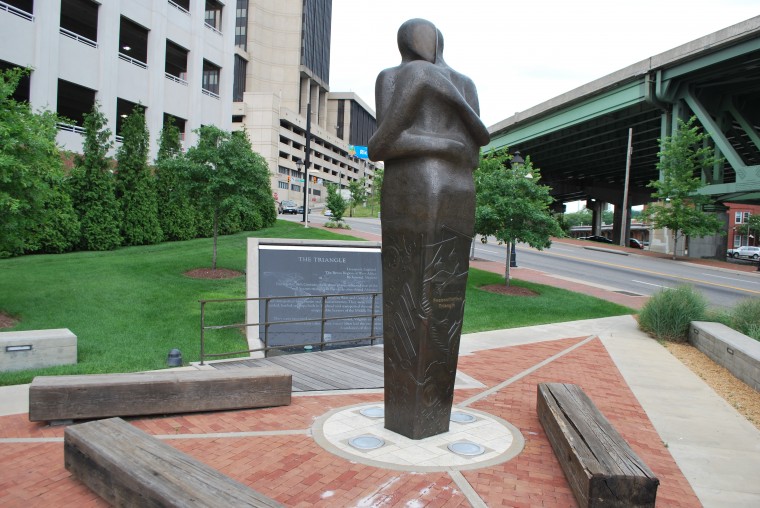 Before I stared to write tonight, I scrolled through Facebook to see what folks had been up to today and found this video on a friend’s page. The poet in the video is responding to the shootings in Florida and asks, more than once, “When is it time to talk about it?” His question gave me a way to talk about our day here in Richmond.

We began our morning at the Virginia Holocaust Museum which is housed in an old tobacco warehouse in the Shockoe Bottom area of town, where they sold slaves before they sold tobacco. Matt, one of our tour guides, began by answering our first question: why was there a Holocaust museum in Richmond? His answer was because there were over a hundred survivors who lived in the city and some of them wanted to tell their stories. They showed an introductory film that included testimonies from six of the survivors, one of whom helped to found the museum. One of them talked about remembering flames, not smoke, coming out of the smoke stacks of the incinerators because so many bodies were being burned.

At one point, our discussion turned to the people that lived in the towns where the camps were located—those who went to work and ate their meals and sat on their porches while people were being massacred behind the barbed-wire fences. For years. Matt was intentional about saying he was not trying to demonize anyone, but to point out that we often do nothing when we feel helpless or hopeless.

This afternoon we met Dolores McQuinn, a member of the Virginia House of Delegates and former Richmond city council member, who has spent years working to make the Richmond Slave Trail a reality. Between 1830 and 1860, Richmond was the largest source of enslaved people on the East Coast. The Slave Trail marks out where the boats filled with people landed on the James, where they were auctioned, where they were imprisoned and tortured, where they went to church, and where they were buried.

She spoke with passion about the development of the trail, the importance of telling the story, and the ways in which her faith had called her to and sustained her in the work of making the Trail a reality. One of the things she said that made it difficult was that many in Richmond, both black and white, had a hard time telling the story because they felt shame, or felt ashamed.

Let’s go back and pick up the first thought about the people in the towns where the concentration camps were located that said nothing and did nothing. And pick up the thought offered by the poet in the video about school shootings who kept saying, “But we don’t want to talk about it.” In our debriefing tonight after dinner, we talked about how many Holocaust survivors have not wanted to tell their stories, or only began to tell them when they thought they were close to dying because the memories remained too vivid and painful. They waited until it hurt worse to hold it in than it did to express it. Perhaps that is part of the reason we are just now getting around to telling the story of enslaved people, even though the Civil War ended a century and a half ago. And we still don’t appear to be ready to tell the true story of what we did to the Native Americans in the name of our freedom.

The film at the Holocaust Museum had one glaring misstatement. At the beginning, a slide came up and the voice said, “This was the darkest chapter in human history.” No. It was a dark chapter, as was the slave trade. Theodore Roosevelt said comparison is the thief of joy. Perhaps it is also the thief of courage and compassion. Our human story has one dark chapter after another. Since the Holocaust happened, we have watched genocides in Rwanda, the Congo, Sudan, and Kosovo, to name a few. And we have allowed ourselves, as Americans, to keep shooting each other. Our shame and silence continue to feed off of each other.

I saw one post tonight that said a movement was growing among high school students to walk out of school on April 20 and not return until significant gun legislation was passed. I hope the post is accurate, and I hope they do it. I’ll volunteer to tutor as many as I can while they wait for Congress to act.

I’ll bet there were a number of people in the towns where the camps were that smelled the burning bodies and thought it was terrible and that they were helpless to do anything that mattered. They even talked about it at church. If they had had a blog, they might have even written about it. When our descendants look back at us in seventy years, I don’t want to be remembered as a well-intentioned bystander.

P. S. Here is the video I linked to above. It’s worth your time.